“For the first time in Western Canadian Baseball League history, all players will be from Canada!

After ongoing discussions and a meeting earlier this week, governors agreed this move would be a real opportunity to showcase how much the game has grown and developed in training top-notch baseball players and students in Canada. The league has also announced that non-Canadian players that had been recruited have been informed that it is unlikely that we will be able to resolve border issues in time for the 2021 season and have allowed those players to seek playing opportunities elsewhere.

“While we’re extremely disappointed that we won’t be seeing US and other foreign players as we would in a normal season, we are confident that the quality of Canadian athletes who play this great game at an extremely-high, competitive level will perform for their respective teams,” Kvame added….

The league has also announced that the 2021 season will not feature all eleven of its member franchises. The Okotoks Dawgs (2 teams), Lethbridge Bulls, Sylvan Lake Gulls and Edmonton Prospects have committed teams consisting of Canadian talent. The Fort McMurray Giants and Medicine Hat Mavericks continue to discuss the options available to them and will decide in the coming weeks. And unfortunately, due to the COVID-19 restrictions, border issues and the uncertainty of any changes, the Swift Current 57’s, Regina Red Sox, Weyburn Beavers, Moose Jaw Miller Express and Brooks Bombers have regrettably made the difficult and heartbreaking decision to wait until 2022 to return to the field.

Kvame also noted that the decisions have been made in the best interests of players, coaches, staff, officials and fans. He adds the teams are eager to bring baseball back to each community as quickly and safely as possible, with government and health authority consent, as baseball is a part of the fabric of our communities and it’s vital to provide a safe outlet for our world-class athletes...””

Q1) With Brooks already opting out, and if Fort McMurray and/or Medicine Hat opt out, will the rights to those players being “loaned” out to other Alberta teams?

A1) The League is working to place as many players as possible from any of the teams who do not play.

Q2)  Can Saskatchewan players move to Alberta to the summer to sign with a team? Are billet families still an allowable arrangement to accommodate ball players?

A2) Yes. Final Billeting, Housing, and testing protocols are still being worked on with AHS.

A3) To have a viable league that accommodates as many Canadian players as possible, Okotoks has stepped forward with the ability to field two teams for this year.  All teams in participating franchises can choose to have more than one team.

A Note From The Sylvan Lake Gulls

As a flex pack holder for the expansion Sylvan Lake Gulls, an e-mail was sent to us by their GM and President of Baseball Operations Aqil Samuel. Here’s an excerpt:

“After careful consideration and months of deliberation, the WCBL (Western Canadian Baseball League) has decided to play under a modified format for 2021.  This format only includes a limited number of teams and a smaller schedule.  At this point we have 5-6 franchises – including the Sylvan Lake Gulls – that are exploring an option to provide a place for Canadian players to hone their skills. The League will soon approach Alberta Health Services with another “Return To Play” Plan. This plan will include an Alberta cohort, with no fans initially, and a condensed season in mid-June to early August.

This “Plan B” season will begin with no fans in attendance, but our hope is that we are allowed a number of fans as the season goes on.  Due to so much uncertainty regarding fans, tickets for 2021 games will be sold at a discounted price on a game day, walk up basis only.  The franchises that have agreed to pursue this plan all agree that it is the best thing to do for our players, fans, and communities.  We have to start getting back to some normalcy and our hope is that this plan will act as a step towards that and help us keep baseball in our communities!”

I reached out to Kris to wonder aloud where all the Canadian Players required are coming from to fill out the WCBL rosters. Here are his ponderings:

“What a day of announcements! The all Canadian rosters are probably not as surprising as the amount of teams that have either said they are opting out of 2021 or are still on the fence about 2021.
It is going to be interesting to see how teams decide to fill a roster of 25+ players if they only had seven or eight Canadians on their roster. That’s a lot of players that need to be found for the teams committed to play in 2021.
Perhaps many more opportunities for Canadian College Baseball Conference (CCBC) players to play all summer in the WCBL now. Will the WCBL teams be able to target any of the older 18U AAA players to fill out a roster?
I feel a Canadian only WCBL will likely hinder Baseball Alberta’s ability to launch their 22U AAA league this season. Maybe 25+ player rosters will be too large to fill and they will need to survive with a 20 player roster. Heavier recruiting across the prairies as well will probably have to happen.

On a positive, imagine what a great opportunity a player who maybe was close but didn’t sign with a WCBL now has to experience summer collegiate baseball and that level of competition.” 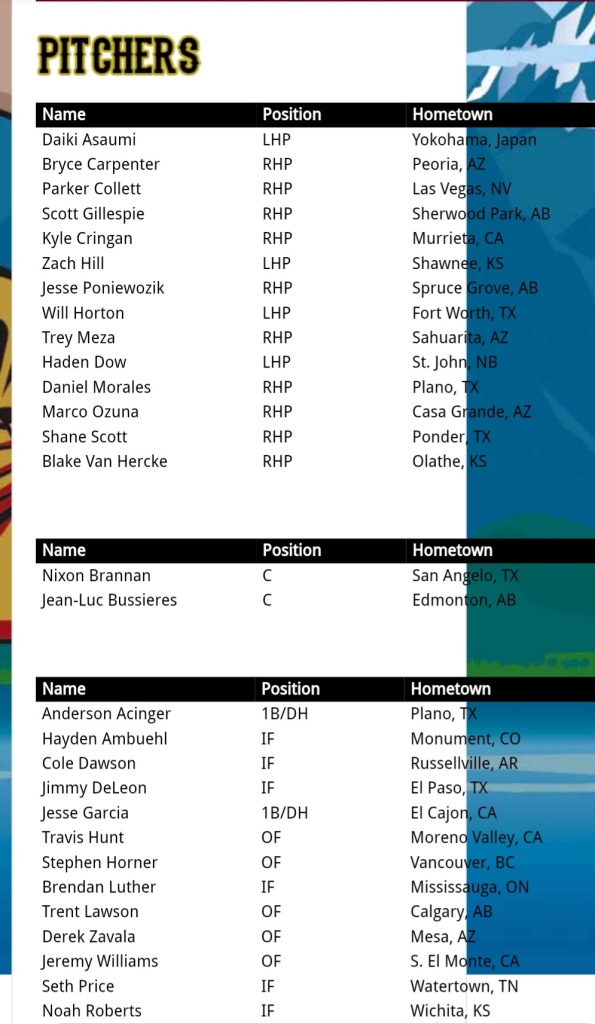 By my count, the Prospects roster before Thursday’s announcement had 7 Canadians signed to it. Four of those seven are returnees for 2021. The “Plan A” schedule had a start date of May 27th. That leaves two months for Coach and Assistant General Manager Jordan Blundell to fill out his All-Canadian roster.

Let’s take a moment to appreciate the effort and work being put forth by everyone involved at the WCBL to bring us local baseball this summer.

I never met Mr. Zittlau, I just knew of his ICU Video company Twitter and YouTube account. In 2019, his company produced and broadcast Edmonton Prospects home games. Tragically Rob was killed last October. With the likelihood of fans not being allowed to attend games, one can’t help but think of how he would have made sure the games were broadcast to fans.