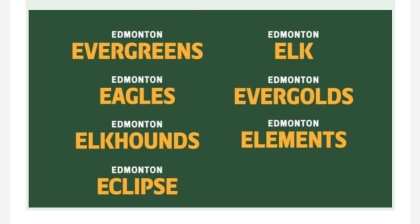 A not so crazy conspiracy theory – the Edmonton Football Team mindfully released their list of potential new team names the day before the Canadian Football League (CFL) free agency period officially started. This way, in case the team names were not well received, the Club could distract fans with their new player signings.

As it turns out the Club has practically united a City that has been fractured by varying views of the pandemic as the overwhelming response to the final seven names has been negative. In case you have not seen the list, the finalists to replace the “Eskimos” moniker are – Elk, Evergreens, Evergolds, Eclipse, Elkhounds, Eagles and Elements.

The returns of Aaron Grymes and Shawn Lemon dulled the pain a bit of losing Almondo Sewell. Opening day of free agency saw the Club announce the signings of James Wilder Jr, Kevin Brown and Taylor Cornelius throughout the day.

Keep the actual football news coming Green and Gold management, it’s a nice change of pace from the name debacle. For the home preseason game on Saturday May 29th versus Calgary and the regular season opener on Saturday June 12th versus Saskatchewan, whatever threshold Alberta Health Services sets for the amount of fans allowed to be attendance, it is sure to be the loudest group Commonwealth Stadium has had in a long time.

A hard name to spell

FC Edmonton has signed goalkeeper Darlington Murasiranwa to a contract for the 2021 season.

FC Edmonton, after a frenetic month of January announcements, recently introduced us to their latest acquisition in goalkeeper Darlington Murasiranwa. The most interesting part of this signing is the fact two of the first players to welcome Darlington to Edmonton were players who had just previously announced their departure from the Club. Dylon Powley, of whom Murasiranwa is ostensibly replacing, and Kareem Moses, literally a day after announcing his departure, took to Twitter to welcome the young lad to the Eddies.

Head Coach and Director of Football Operations Alan Koch has consistently stated that “I would like to give more players from Edmonton their professional debuts. The caveat being the players have to be good enough to help us achieve our goals on the pitch.” Murasiranwa was born in Zimbabwe and moved to Edmonton when he was 13 years old. The now 19 year old played for the FCE Academy.

United Women’s Soccer (UWS) is the newest league to hit Northern Alberta. Our proud representative in the league will be the Impact FC based out of St. Albert. The Club recently announced the signing of Kayla Mostowich.

Mostowich becomes the third player listed as a defender signed by the Club joining Kayla Evans and Jasmine Hall. She becomes the fifth player that has the word “Captain” in the Club provided bio of her.

From her Nebraska Huskers Soccer bio, “2019 (Sophomore) Kayla Mostowich played 10 games, including two starts, for a total of 139 minutes in 2019. She dished out one assist and added one shot. On Sept. 29, Mostowich recorded the game-winning assist when she found Brenna Ochoa, who scored in the 59th minute. Mostowich played 49 minutes against the Fighting Illini, a season high.“