Part one of tearing down the stigma surrounding Roller Derby was focused on the pageantry/gamesmanship of the sport. Part two will focus on the perception the sport is overly violent. A big thank you to the several members of Oil City Roller Derby (OCRD) who responded to the call to defend their sport.

Popular sports such as football, boxing and UFC sometimes fight the perception of just being mindless violence. Somehow that perception has seeped deeper into Roller Derby than those sports. How and what has been done to change?

In the days of the late “Skinny Minnie” Miller (1960s) roller derby was a  violent sport. They played on banked tracks and duked it out there for crowds that cheered for it. Today we have advanced in that, like most sports, we now have strategies to control the game. Some Leagues out there even have play books that they reference for certain situations.

We are about containment and working together to stop the opposing team, not destroy them physically. Sure there are the odd BIG hits that the crowds go nuts for, but we find that working as a team works better than individual mindless violence. Plus in the derby community, we all know each other and we are all friends so why would we want to physically hurt a friend on purpose? 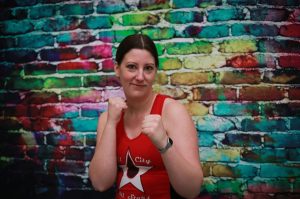 Honestly, as I’ve learnt it, Roller Derby used to be a lot more like wrestling. It was a show with rivalries, fights (some staged and not), fantastical fierce outfits and personas, blaring music, etc. By the time I joined (about 10 years ago), Roller Derby was definitely a competitive sport that still had its fun flair with music, outfits, face paint, and derby names. And it has continued to have evolved since then. The derby clothing is a lot more practical and safe (not as many tutus or fishnet stockings), some leagues don’t play music during jams as it’s considered a distraction, some leagues only use legal names, etc. The safety aspect has definitely jumped up as a priority for leagues, at least in my area.

A significant portion of rules for playing revolve around the safety of skaters, referees, and even the spectators. There are many, many rules on how we can hit each other. Bad hits are penalized, extremely bad hits can have players immediately expelled. Injuries happen all the time just from someone falling badly that one time. One aspect of sportsmanship we have, is that if someone is down and not getting up right away, everybody from both teams drops down to take a knee in order to signify that a skater needs help. 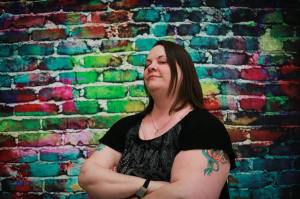 I think that particular perception of derby has come primarily from movies that have shown it in that light, but it is no different than other contact sports. MOST hits are not that hard, and always for a game purpose. Sometimes someone gets hit hard but the intent is not to hurt each other violently, derby players try to ONLY hit hard enough to stop the other player from getting their points.

What they DON’T show in the movies is how often after opponents hit each other they help them back up with an apology, a hug, a high five, and they chat on the way back to the bench. Derby teams and leagues are a family! Not just within our OWN league but other leagues too. We often play on the same mixed teams in scrimmages, we help each other to make full teams when one cannot but wants to play. We all know each other and look out for each other.

So there is far more love than violence, and there is never mindless violence. Every hit is for a purpose, and with love (lol). If more people came out to games, and watched how we play they would see that we are family and we do everything we can to not hurt each other. 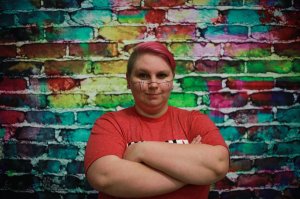 Roller derby is a contact sport absolutely, but certainly not mindless violence. Aside from the media hysteria in movies and comics, I haven’t actually heard this association, especially in the later years of my involvement. Roller derby utilizes so much strategy in it’s various positions creating a complex web of athleticism and wit. You need the ability to anticipate moves, react to plays, and alter course in a split moment in order to fluidly play the game.

I would say in my own experience the game has gone from being seen and played as entertainment to more sportsmanship. It began with the emphasis on outfits, alter egos and big hits to draw in spectators and give players a place to become whoever they wanted to be. Now I see it being more about building up the team with athleticism, competition, and cohesion.

Players and officials still are able to harness their inner cool kid and have the derby name and accessories, but more focus is on the team rather than the self. This I believe has reduced the perception about heightened violence (which so many penalty codes eliminate as well) and hopefully allows more viewers to see it for the great sport that it actually is. Don’t get me wrong though, I’m still a sucker for those big knock downs but watching a team come together to outwit the other team is just as satisfying to watch. 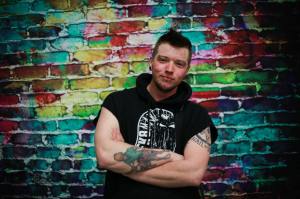 100% it all depends who you play against. Like any contact sport their are dirty players, friends that go harder on you to push you around. But like any contact sport there are rules, non bias referees, safety measures taken to assure safety to make sure we can keep playing as long as we can. Practicing basic skills to make sure you don’t injure yourself. Needing to work up to a skill set to to be able to play.

Mindless violence will get you nowhere in derby. Aside from the fact that it doesn’t have a place in the larger derby community – being someone who deals “dirty” hits is the lowest i have seen anyone considered – it’s simply not going to help you succeed. Someone who goes in for mindless aggression will quickly be outdone by skilled, precise players who work as part of a team.

Yes there can be big hits! That’s part of what makes it fun. It’s cathartic to pit your strength against a willing opponent, even when you don’t succeed. We often lack an outlet for physical aggression and hitting people who are in on it is an absolute blast. Like Ivana mentioned, there is a code of conduct among derby players and nearly everyone is happy to congratulate each other on dramatic hits, both during and after the game. (and to compare bruises when they happen!)

Again, I think this speaks to the “legacy” of derby that was televised in the early 70s. We recognize that the sport began with some dark roots. An example of this is the “penalty wheel” which was a wheel that an audience member could spin when one of the players received a penalty. Some of the penalties on the wheel included “spank alley” where the girls had to skate by a bunch of audience members and get a spank from each of them. Can you imagine? Since the #metoo movement began, this would never be considered.

The same thing goes for game play. The game has changed significantly. There are rules, which morph to promote safer game play. When OCRD trains their skaters, they train them to hit and take hits, but the focus is on positional blocking, getting in another skater’s way to frustrate the hell out of them. This ties into your previous question too, as since the game has changed, the demand for high athleticism has changed (increased) too. Positional blocking takes more finesse and skill (and athleticism) than simply hitting someone hard. The “big hits” look dramatic, but from the skaters’ perspective, they can be a waste of energy and are only used when absolutely necessary. Skaters must focus on the objectives of the game in a way that is most efficient and most effective. This usually isn’t a big hit.