The Beaumont Outlaws (formerly known as the Edmonton Outlaws and Sherwood Park Outlaws) dominated the Alberta Senior B lacrosse scene at the turn of the century. Each year from 2001 to 2008 they won the Rocky Mountain Lacrosse League (RMLL) Provincials. In 2002 and 2007 the Outlaws won the President’s Cup. The Club also collected Silver in 2008 and Bronze in 2003 and 2005.

As a part of that dominance, four consecutive years the “Harris Toth Award”- regular season points leader – was earned by an Outlaw player.

Outlaws alumni Dan Bostrom and Colin Sherbanuk were both kind enough to talk about their respective season that etched their name in Harris Toth Award history, 2002 and 2004 respectively. 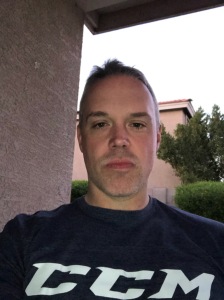 “I do remember leading the league in scoring in 2002. I didn’t remember how many points though.

That was a very memorable year for us though because we won the President’s Cup that year at home in Edmonton. We were a very strong team mostly due to how much the guys loved each other. I’ve always felt like something magical happens for you to win that trophy.

The magic comes from all the people involved deeply caring for each other. We had such a deep pool of talent on our team and one of the most interesting things was how many pairs of brothers played that year. There was myself and my brother Curt, Jamey and Jason Bowen, Steve and Phil Smythe, Chris and Pat Stachniak.

The whole team was homegrown Edmonton and area guys. It was a very memorable summer. I’d be surprised if every guy on that team didn’t have a photo of that championship somewhere in there house still today. “

I wouldn’t of been able to tell you what year I won the Harris Toth trophy. It has been quite a few years since winning the award. It is an honour as Mr. Toth was one of many great people that did a lot for Alberta lacrosse!

Being a member of the Outlaws was an amazing time for myself and I’m very lucky I got a chance to play for such a great organization and team filled with so many dedicated, hard working people. The team has such a great history with so many great people! I had success in the game because I was lucky enough to have played for many great coaches growing up that had the patience and dedication to teach the game. Harry Anders, Rod Wolanski, AJ Jomha to name a few.

My father Mike was a huge fan of the game and taught me so much as we would always watch Senior A games when I was a young child living in the lower mainland. Also I have two older brothers that played and I always got a chance to join their teams for practices and watch their games. I was also blessed to play with talented players on the Outlaws and throughout my career and I was just lucky to get the award.

The Outlaws were great to me and I loved my time with them! It was truly an honour to play with such a high caliber mix of lacrosse talent. I’d name a few players but honestly everyone I played with deserves credit. Everyone brought there own touch to the game and the work ethic to win and grow as a team was unbelievable by all. It was hard work being an Outlaw but it was worth it to have all the great memories and the lifelong friendships that evolved from my time there!

Thank you Dan and Colin for participating in this memory test. I am glad you both enjoyed this exercise. Now we all await more lacrosse memories to be made.